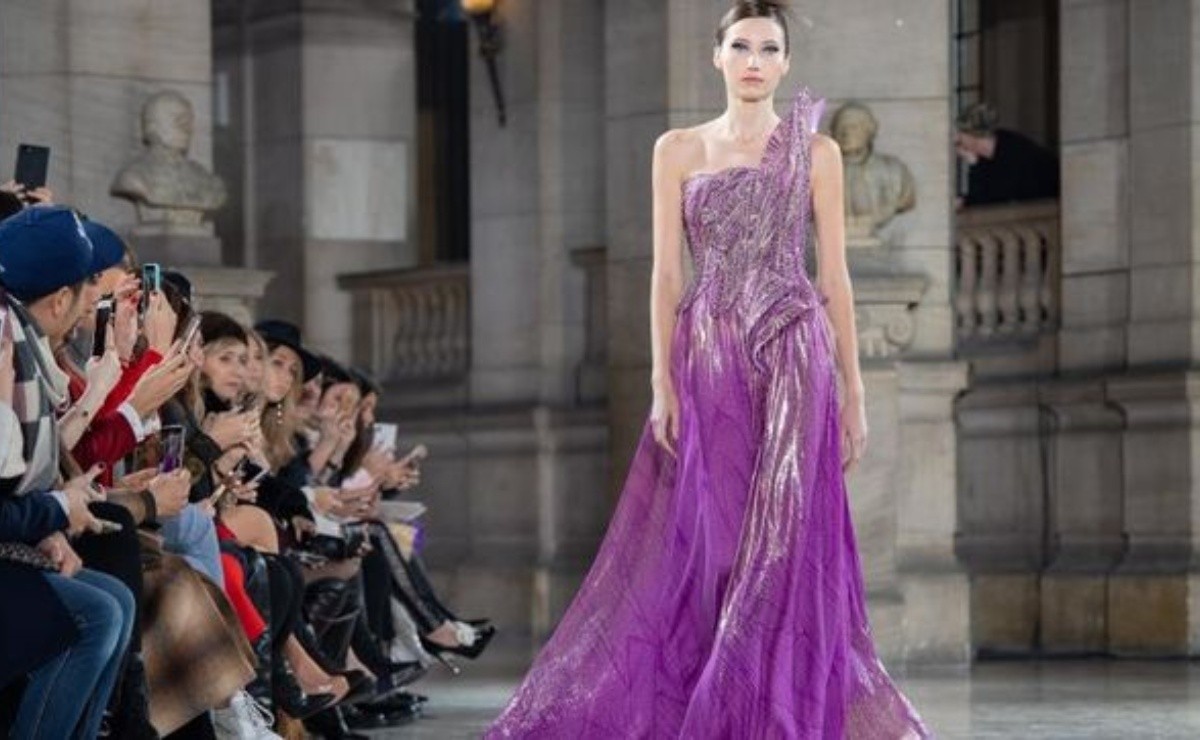 Dresses made from feathers and brilliants, voluminous skirts to recover the spirit of the ballrooms of Romanticism and nods to the forties are part of the proposal

A reason for superstitions for some or a beautiful panorama for others, the designers of Haute Couture looked to the sky on Monday in search of inspiration for their most exclusive garments, in which they portrayed constellations and galactic landscapes.

Early in the morning, the Palais Garnier at the Paris Opera hosted the Schiaparelli fashion show -the firm that reopened a few years ago to recover the house founded by Elsa Schiaparelli in 1927- with which the presentation of spring collections began- summer 2019.

The creator moved in the artistic circle of the surrealists, such as Salvador Dalí, whose drawings served as prints for her dresses, in the same avant-garde line as that of the painters.

Elsa Schiaparelli was superstitious since childhood, when her uncle Giovanni taught her the constellations from a Milanese observatory.

The memory remained in his memory. Years later, the symbols of the zodiac, the stars and other stars were the embroidery on their dresses.

The French designer Bertrand Guyon, who today leads the reins of Schiaparelli, recovered these codes in a more rocker collection, with stars embroidered on a large scale on taffeta and a starry night of sequins and brocades on a translucent black chiffon.

Guyon came up with daywear, such as shorts in a statuesque silhouette that marks the hips with volume and in puffy trapeze skirts over tutus in shocking pink, Schiaparelli’s favorite fuchsia.

The jackets embroidered with zodiacs and comets were worn for the evening, over double crepe bermuda shorts, while embroidered tulle, pleated muslin and organza shaped the most striking dresses in the collection, with volumes and tails, slightly airy. child by the use of pastel colors.

The French-Algerian former model Farida Khelfa (1960), one of the muses of the designers Jean-Paul Gaultier and Azzedine Alaïa in the 1990s, also paraded the catwalk, who wore a sober black dress with cowboy boots, the shoe that accompanied all the designs of this presentation.

Hours later, the Dutch creator Iris Van Herpen, known for her collaborations with scientists and engineers, showed her particular vision of the universe and her unstoppable ambition as a seamstress at the Palace of Fine Arts, facing the Seine River.

On this occasion, Van Herpen teamed up with the American artist Kim Keever, a former NASA engineer known for his aquatic paintings with which he experiments with the idea of ​​the ephemeral and with movement.

The Dutchwoman presented 18 styles stamped with Keever’s illustrations in translucent dyed silks on three-dimensional dresses with structural shapes that allow her a laser cutting technique, which she already used in her previous collection.

Van Herpen is one of the few Haute Couture designers who can boast of offering a fashion that looks to the future and does not seek inspiration in previous decades, and puts on the catwalk designs that turn models into space creatures.

On this first day of parades it was also the turn of the Lebanese Georges Hobeika, who portrays the opulence of the Sheikhs in his creations.

Dresses made from feathers and brilliants, voluminous skirts to recover the spirit of the ballrooms of Romanticism and nods to the 1940s as a strapless long to the ankles but with a side opening that reveals the entire leg .

White and silver reflections dressed the runway, where pastel colors such as peach, sky blue or pink put more light on the evening dresses.

The Haute Couture presentations continue this Tuesday with proposals from Chanel, one of the great events on the calendar, and from French creators Julien Fournié and Alexandre Vauthier.