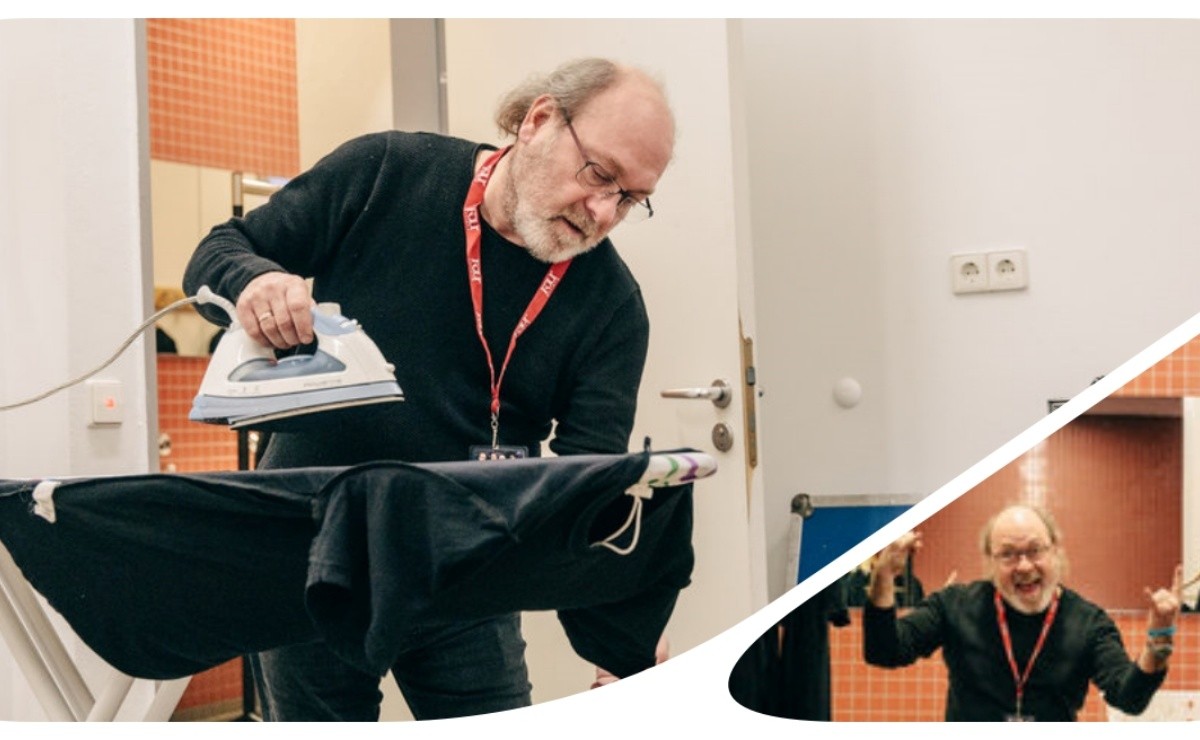 Meet Topf , the man who discovered his true passion when he came across a laundromat and has now become the one who washes and irons exclusive clothes for celebrities. This man has traveled with many celebrities and is an expert in taking care of his clothes.

On a November afternoon, Hans-Jürgen Topf was walking behind the scenes at the Mercedes-Benz Arena, where dozens of people were unloading gear for the final concert of U2’s “Experience + Innocence” tour.

After greeting and enthusiastically hugging several team members, Topf, 62, came to a room full of running washers and dryers. "This is my life," he said. "Artists live their life and I live my laundry life."

Topf is the world’s most recognized touring laundry specialist. He has traveled with many of the biggest celebrities in music, including Madonna, Pink, and Beyoncé. As tours have gotten bigger and more professionalized, the logistics involved are becoming more and more overwhelming. U2’s “Experience + Innocence” lasted around seven months and traveled over two continents, requiring the work of approximately 150 people. They all needed food, a place to stay and, yes, clean clothes.

That’s what “Der Topf” is for, as he likes to call himself. His company, Rock ‘n’ Roll Laundry, provides laundry equipment and staff for tour productions. Although Topf was not on the U2 tour due to a back injury, he went to Berlin to pick up the machines that he rented to the staff (he usually stays in his native Germany now, due to his injury, but previous tours have allowed him to). have led to countries in South America or Australia).

"My good reputation is already known," Topf said. In the world of music before, "nobody tackled the issue of laundry, nobody wanted to learn how to do it," he added: "Until I developed a system to fix it."

"He’s a trailblazer," Jake Berry, production director on the U2 tour, said by phone. Berry explained that even twenty years ago most of the clothes during a tour had to be washed quickly at one of the stops; for which any local self-service laundry was used. Those clothes, he said, came back wet or ended up mixed "with some girl’s panties."

Until, in the early 2000s, Berry said, a "young man" – Topf – came to stand outside German concert venues with a van. It offered to pick up, wash and return clothes from production. Berry said the items came back "well folded and flawless." It was not long after that they invited Topf to join them on the tour.

"It’s very difficult to find someone who is passionate about laundry," added Berry. "It is".

A few weeks after the U2 concert, Topf – who has a little belly and wears metal-framed glasses – was in a basement at the Max-Schmeling-Halle, another Berlin venue. There he helped his son, Achim, 31, do the laundry for Die Fantastischen Vier, a popular hip hop band.

The biggest challenge in doing laundry on tour, Topf explained, is the quantity (it can vary unpredictably) and the need to work without a fixed location. You often have to do your job wherever you can find running water; once he even had to do it in small makeshift cells where troublesome fans were taken to a South African compound. "I know the toilets in every German football stadium," he said.

When on tour, Topf starts most of his days doing laundry for the artists’ clothes, which usually need to be dried with a small fan to be ready as soon as possible. He said the dirtiest clothes he has washed were the overalls-style suits worn by the metal band Slipknot: they were doused with beer, cream and fake blood and kept in garbage bags for three days.

According to Topf, the most common stains on artists’ clothing are sweat and aluminum dust from the ramps that tour staff use to move equipment to the stage. That dust ends up on the performers’ clothing as they kneel or roll across the stage. The best solution to avoid staining, Topf said, is for staff members to put some kind of mat on the floor where the artists will be: "It’s better for the pants."

There are many risks when washing artists’ clothes. Topf recalled an incident with British musician Joe Cocker, who was enraged after a faded stripe appeared on pants that Topf had washed. "I’ve never forgotten it," he commented.

He once also shrugged a pair of gold pants from actor and singer David Hasselhoff. On one occasion, a person Topf had hired ruined a $ 3,000 Janet Jackson vest. However, he was quick to point out that accidents are rare: "Der Topf is very reliable."

Also read:  Letizia repeats the costume of her request on Valentine's Day

When on tour, he often spends three to four hours every afternoon ironing the artists’ clothes, the least part of his job; at the same time he washes the clothes of the whole team. He said that on some tours he spends up to twenty hours a day doing laundry. After a show, the washing and drying machines are put into special roll containers so that they can be trucked to the next destination.

Topf noted that the touring business has become much more professional and entrepreneurial since he began his career. He used to find drugs in clothes all the time, he said, but "now he’s more likely to find a tea bag."

Joe Pomponio, a stage manager for various festivals in Europe who has worked with Topf many times, noted by phone that conveniences such as professionally washed clothing have become vital for many artists who spend years on the road. He added that he didn’t know of anyone who offered a service like Topf’s, and that Rock ‘n’ Roll Laundry was the go-to company on the European festival circuit. "Der Topf is everywhere," he commented.

Topf was born in 1956, into a family of refugees from the German Democratic Republic, which was then the socialist part of the country. His father worked as a smuggler; he transported people through the Iron Curtain when crossing shipments of potatoes. Until the East German secret police found out, after which Topf’s father escaped with his wife to Ludwigshafen, a West German town, where they founded a laundromat. Topf still lives there.

Achim Topf organizes the clothes that the members of Die Fantastischen Vier will wear on stage according to the initial of the member’s name and the order in which they will wear the clothes, before the concert on January 13. Credit Felix Brüggemann for The New York Times

One afternoon in 1982, while making a delivery to his parents’ business, Topf ran into the tour bus of American rocker Ted Nugent, who appeared to be lost. After giving the conductor directions, they gave him free passes to the concert and, that same night, he offered to do the laundry for the band.

When encouraged by the Nugent representative to continue his services, he began standing outside the venues “like a fan” and offering his same-day laundry services to visiting artists, including Elton John and Blue Öyster Cult. .

He ended up buying a small truck that he loaded up with two washers and two dryers, to move along with the bands that were on tour. At night he slept on top of their machines and by day he washed clothes for bands like the Bee Gees, among others. Currently, most of Topf’s income comes from machine rentals to tour productions;

He recently collaborated with an entrepreneur who started an American version of Rock ‘n’ Roll Laundry. Topf also runs a laundry business in Ludwigshafen, where he runs businesses and restaurants.

He said that laundromat in Ludwigshafen has a collection of photographs of his favorite customers, including Phil Collins and Harry Belafonte. Topf said Belafonte autographed the photo and left a message: "Thank you for getting the stones out of my pants."

"I have no idea what it means, but those things have to be put away," Topf said.