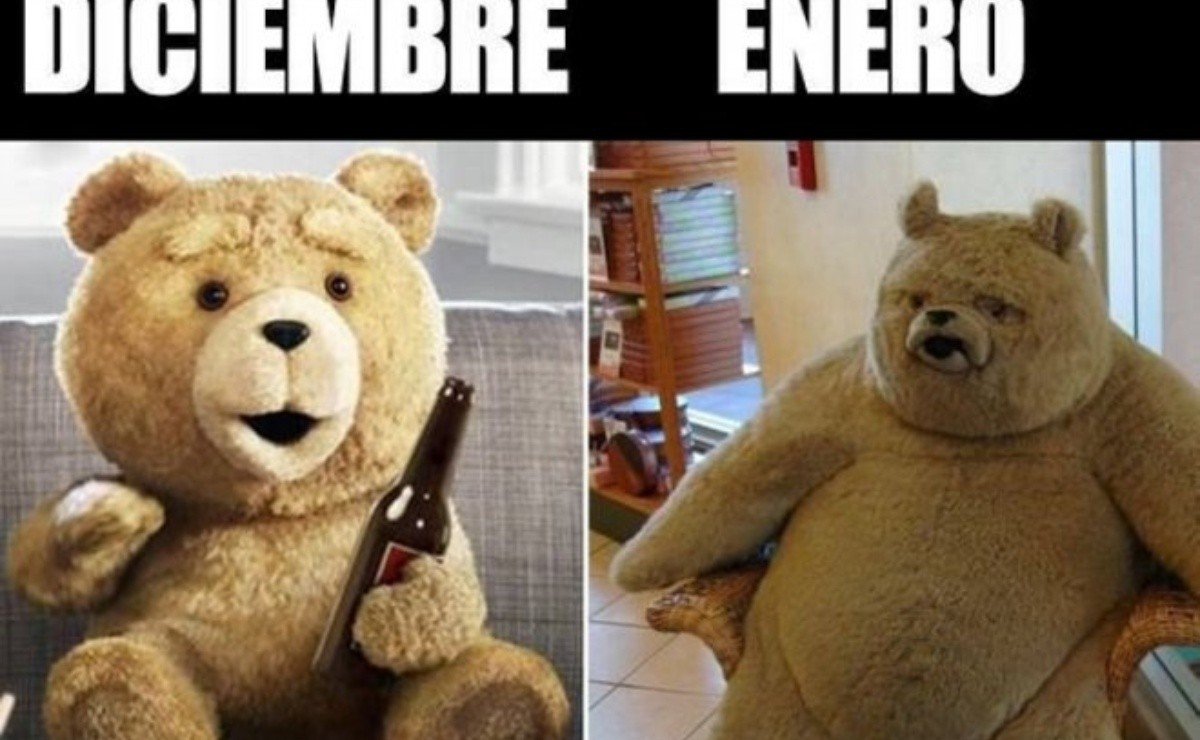 The “memes” that circulate on social networks are the new “detox” trend. A proposal championed by humor that makes the January slope and the diet more bearable after the Christmas feasts

Humor, positivism and joy, whenever it is, are always good allies and after Christmas, a great help, since, although January is a month where New Year’s resolutions abound, if the post-Christmas diet is faced with humor , it is more bearable.

Goodbye to Christmas, the Three Kings and Christmas binges , the festive season has come to an end and the routine has returned. From now on, the cold without gifts, exams or work meetings postponed during these dates add to the extra load left by polvorones, marzipan, nougat and roscones.

Exercising more is one of the most repeated resolutions when a new year begins, but also one of the most unsuccessful in its achievement, something that would not have to happen if “people did not stop training during Christmas and resume it once finished, since returning to the routine from scratch is always more expensive ”, explains the personal trainer, Noemí Todea, in an interview with EFE Estilo.

"Positivity, happiness, being relaxed and having a relaxed atmosphere are factors that, when exercising, are necessary."

"Every year we fall into the same customs and the same pattern is repeated: a lot of motivation the first month of the year and from the second we lose interest and decline," says Todea, who assures that around 40% of people abandon the good lifestyle habits after a few months.

After Christmas binges, "one of the most common mistakes we make is obsessing over doing cardiovascular exercise because we think it burns more fat", however, experts have shown that this is not the case, since "it is essential" to supplement cardio with bodybuilding exercises.

Also read:  How To Make The Smell Of Your Favorite Perfume Last Longer

After the Christmas binges, humor is necessary

"Positivity, happiness, being relaxed and having a relaxed atmosphere are factors that, when exercising, are necessary", says the "personal trainer", since "physical activity is not synonymous with being in the army ”.

In order not to lose motivation, in addition to “being accompanied by someone who has the same goals”, the fact that “training or physical activity goes hand in hand with leisure helps not to decline”, explains Todea.

"The key to this is to do something that you like and that is pleasant to you, because if you get bored you will not pay attention and you will leave it to the minimum."

Social networks are also participants in the humor that the "extra pounds" that are taken during these dates awaken and that is, the "memes" that make mention of this issue are already a classic year after year.

And there are as many "memes" as you like. From those who recover classic works of art such as "La Gioconda" (1797), by Leonardo da Vinci, to those who use contemporary films, such as "The Hunger Games" (2012) to kick off diets or " The Lord of the Rings ”(2001), to represent the rise of gyms after Christmas.

Some prefer to entrust themselves to the Saints and others choose to make comparisons with digital platforms such as Google Maps or Trip Advisor, mentioning the amount of food and drink that has been ingested during the Christmas season.

The videos or Gif also remind you, through Twitter or Instagram, that the extra kilos that have been added to the scale in recent weeks. This is the case of the video that circulates on the net in which a sea lion appears doing sit-ups, an endearing invitation not to lose hope.

Also read:  Tips For Choosing Your Friendships Well According To Aristotle

And is that if a few touches of humor are added to the extra kilos, exercise, problems and life in general, the New Year will always start on the right foot.