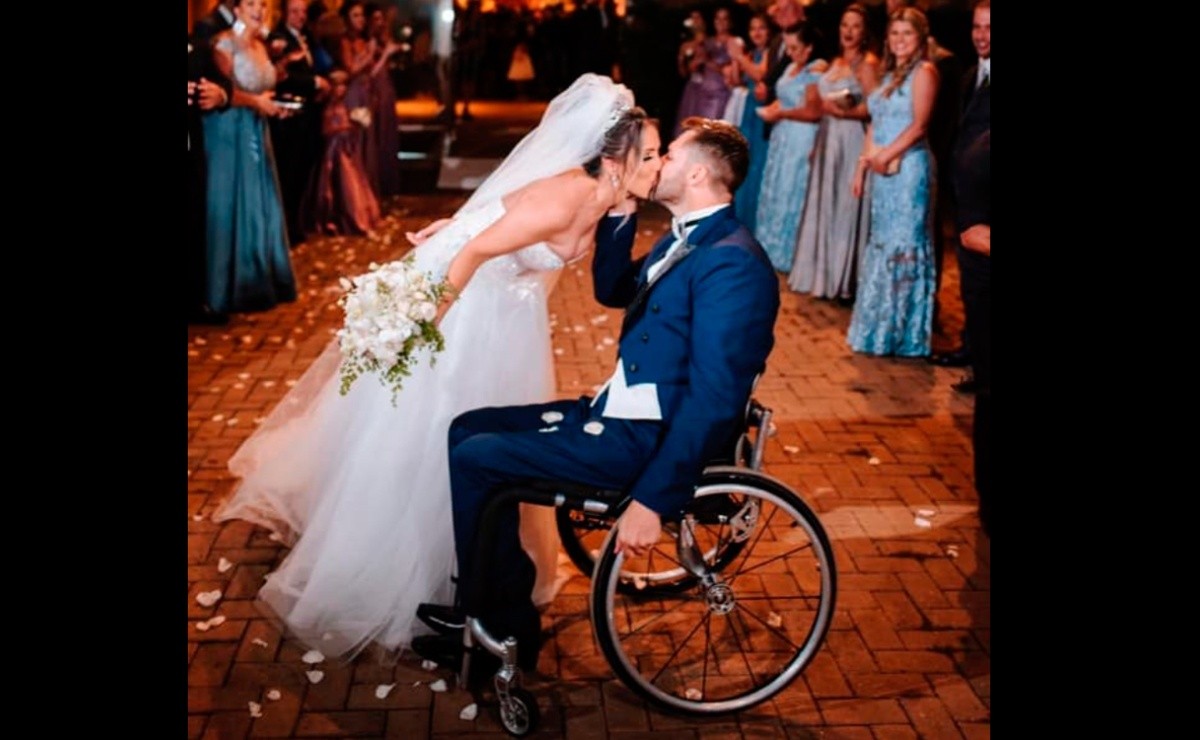 The emotional video has been seen by millions of people where the paralyzed groom is seen dancing at his wedding with the help of his father, an unforgettable moment

Groom with paralysis dances at his wedding with the help of his father and brother so that he can make the first waltz with the bride . The emotional act occurred in Brazil and the video of the paralyzed man has gone viral. Thousands of positive and loving comments have been received by the couple, the father and his brother for the beautiful gesture during the dance.

In the video you can see Hugo Rohling in a wheelchair being lifted to perform the wedding dance with Cinthia Zanuni.

The love story between Hugo and Cinthia touched millions of people in a video on the Internet. Hugo, is a cadet and suffered a motorcycle accident in 2014 that left him in a wheelchair. He has always had the help of his father and brother to stand up and dance the waltz with Cinthia.

When the groom gets up, Cinthia places her head on his chest with her tear-filled eyes and the couple gently dance back and forth to the Sam Smith song Make It To Me before sharing a kiss.

During the clip, the groom’s father and brother sit shoulder to shoulder with him while another man fastens the straps to his legs.

Cinthia Zanuni recalled how her now husband asked her to marry her and her words moved thousands of people even more.

"And that’s how it all started, I remember how many times I dreamed what that moment would be like, who it would be …
In the event that the names of the characters in the film, the characters in the saga of the saga, are not known, the photo will be funny … But funny and exciting it was when instead of playing she gave it into my hands my great dream and then a video began to pass on the screens, there I no longer felt my legs, I was living my great dream with the great love of my life on one of the happiest days of my family … my sister and the Great Order, in great style from my beloved Hugo Rohling. There I saw the care of God in allowing my family and friends who prayed so much for that moment to be with me to celebrate the answer of many prayers to the father …
I believe that his moment will still come and it will be beautiful like mine. "