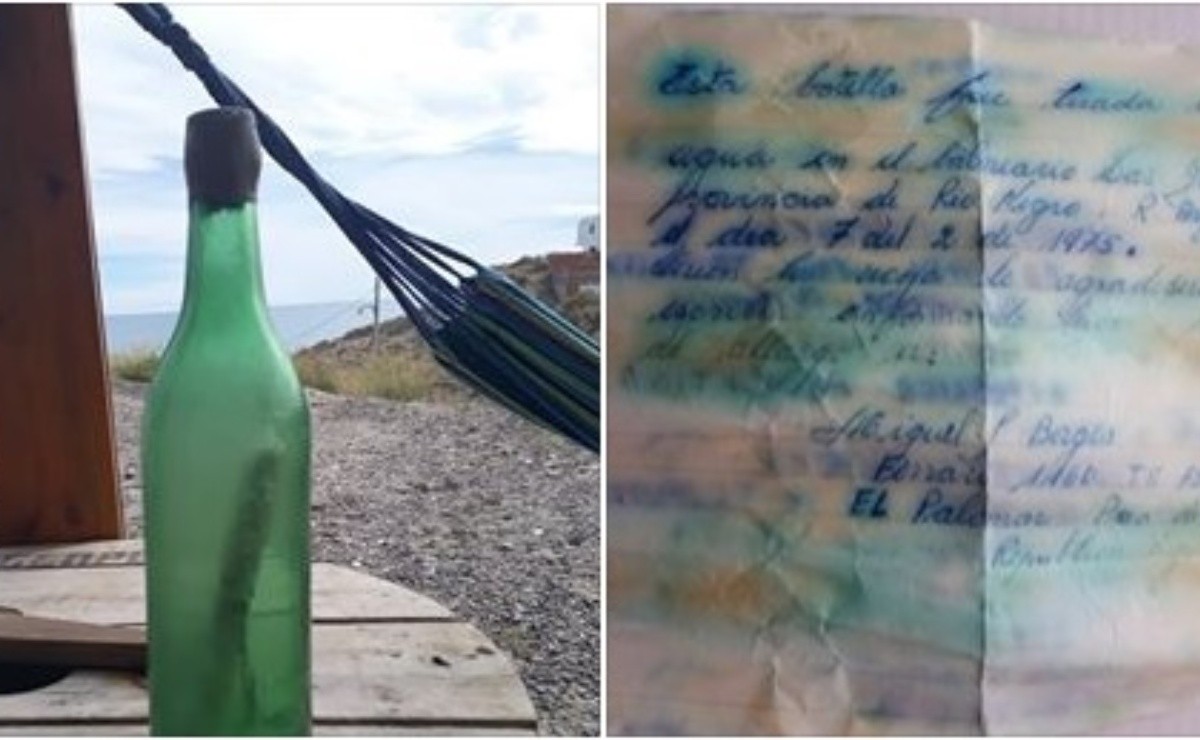 Luisina Morando found a message in a bottle, whose author asked to be contacted, she did it and this is what happened

A teacher named Luisina Morando, found a bottle with a message inside , just like in the movies, while collecting trash. The fact gave way to a beautiful story that we will tell you below.

The bottle, as documented by Luisina on her Facebook profile, did not contain a message asking for help from a lost island, rather it was a message sent 44 years ago by its author , who asked to be contacted, although sadly, in the end, it seems, he would die alone.

The message began its way, floating in the water, precisely on February 7, 1975, until finally on March 5, 2019, it was found by a 29-year-old girl in Bahía Creek, in Argentina, a spa located just 90 kilometers from Viedma, in Río Negro.

She was spending a few days there with her boyfriend and her in-laws. The family plan was to fish, but since the day was not exactly good for that activity, he decided to take a drawer and start lifting the garbage thrown in the place.

The girl who found the bottle, in the middle of the Carnival weekend, said in an interview provided to the newspaper El Clarín that she found the bottle half buried with the spout down and the glass slightly damaged by the rubbing of the sand.

The lid was well sealed. The special moment happened just when he saw the letter, "funky" inside the bottle.

So she decided to take the bottle home and at the time decided to keep the bottle, until she began to remove the putty that kept it sealed. Then he noticed that the container had a cork, which he pushed to later discover that the letter was damp, weak and wrapped in plastic.

Then he prepared to take out the little letter written in ink that, although it was fading, could be read.

The message read the following:

"This bottle was thrown into the water at the Las Grutas spa, Río Negro province, R. Argentina, on the 7th of 2, 1975. Whoever picks it up, would be grateful to write informing the place and date of the discovery."

The text had the name of the author: Miguel J. Borges, as well as a telephone number and the information that he was from El Palomar, province of Buenos Aires.

Beyond what we could imagine, the message inside the bottle did not tell a story, nor was it a love letter, it was simply someone asking to be contacted, possibly because he felt alone.

Once with the message in hand, Luisina made the decision to search for the author’s name on Facebook, although at the outset she assumed that he was an adult, “add up to the 44 years since he wrote it and no profile found the physiognomy of the one who it could be Miguel. I called the number and it did not exist, "said the young woman.

After that failed attempt, as documented by El Clarín, the young woman decided to publish photographs of the letter and the bottle on Facebook, initially her idea was to share the curious finding with her friends, however, it went viral.

The letter reached Facebook groups of residents of El Palomar; It was then that a neighbor told him that the Borges no longer lived in that neighborhood, but had moved to Villa Urquiza.

In addition, he gave him three telephone numbers of the building where Miguel, the author of the message, possibly lived, as well as another one that could be his son.

"I tried the first and no one answered. The second gave a subscriber out of service; five minutes later, they call me back from the first number," he explained.

Although it may surprise you, it turns out that the person who contacted her was Mabel Ballestero, the wife of the author of the message, who had just been with him during a vacation in Las Grutas in 1975, when the message was sent.

However, the news was sad: Miguel had died six years ago.

"Miguel was about doing those things. It would never have occurred to me to do it. He was very adventurous," he said.

Miguel’s wife told him that he had sent the message just when they were on vacation with another couple. Currently she is 80 years old of her. As a couple they had two children.

Although the story is emotional, it also has its sad part, as it turns out that the romance between Mabel and Miguel ended many years ago, so much so that she did not even remember the exact date.

He does not even know what Miguel died of, who in life worked as an electrician and spent his time traveling. He never had contact with his son, and the one who handled all the details of the funeral was his son.

The man also did not know his grandchildren. Against this background it is not difficult to imagine that he probably died very alone, although of course, the story he lived at the end of his life took him to the grave.

Mabel and Miguel when they were a couple, had traveled throughout Argentina in the 70s, it was precisely on that trip that the message in the bottle began the journey that ended in our days, when it was found by Luisina.